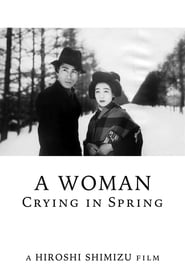 Described by David Bordwell as ‘probably the greatest revelation’ of the retrospective of Shochiku’s early sound films at Bologna last year, Shimizu’s first talkie is an intense melodrama about the love between an itinerant woman and a miner. Though Shimizu is known for his heartwarming films about children, this bleaker film illustrates what Wong Ain-Ling calls the director’s ‘affinity [with] fallen souls,’ his interest in vagrants and fallen women. Shimizu apparently hated Japan’s northernmost island of Hokkaido, where the film was partly shot on location, but used its snowy landscapes beautifully, creating telling contrasts between them and the interiors, where he experimented with the use of shadow. He also made full use of the potential of sound film by incorporating songs into the drama. Yasujiro Ozu is on record as saying that he felt challenged by Shimizu’s achievement to make a sound film of his own—the work which was to become The Only Son.

Sun Above, Death Below