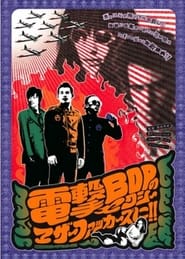 Writer-director Shimada Kakuei’s madcap 2006 indie comedy Blitzkrieg Bop is loaded with music references and a surreal, explosive story that will leave you either scratching your head or shaking it in amazement. The film follows punk rocker Okajima (Nakai Masaki) who has never lost a fight. One day, his ex-girlfriend appears and asks him to save her current boyfriend from the yakuza.

The Lord Takes a Bride