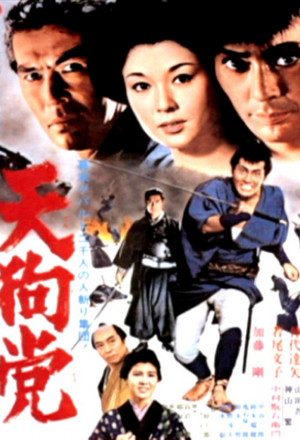 BLOOD END is one of the great unknown films from Japan’s golden era of the late 1960’s. Starring NAKADAI Tatsuya in one of his best roles, this is the story of the Mito Tengu Group who attempted to overthrow the Shogunate at the beginning of the Bakumatsu Period. Their political aspirations led to countless assassinations, as well as senseless killing of innocent people who got in their way. Sentaro (NAKADAI), a farmer who’s been severely beaten for his outspoken defiance of the government and the high taxes during a time of famine is befriended by one of the group’s leaders, KADA Gentaro (KATO Go) and joins up. This is the masterpiece of director YAMAMOTO Satsuo (who is best known for the first film in the NINJA, BAND OF ASSASSINS series) the erstwhile ‘Leftist’ director, who used his films to make his political points. Stunning fight choreography, and ultra-violence make this one of the bloodiest films of that era. A powerful film Rare classic!