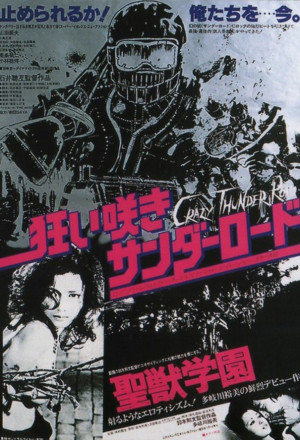 Visions of a bleak, post-apocalyptic urban wasteland strewn with twisted hunks of mechanical wreckage. A rasping electronic buzz on the soundtrack. These impressions kick-start into a jarring, rapid-fire sequence of chrome, neon and showers of sparks alongside the howl of roaring motors, as boys in black leather with Be-Bop High School quiffs ride menacingly out into the night in the theatrical debut from arguably the most important director to emerge from Japan during the 80s. Completed by former punk musician Ishii for his film course graduation from Japan University in Tokyo, this raw-edged biker flick is a tour-de-force of automotive auto-eroticism. Originally shot on 16mm, Toei were so impressed by this violent counter-cultural kick-back against the anodyne fluff that typified early 80s cinema that they blew it up to 35mm for theatrical distribution.