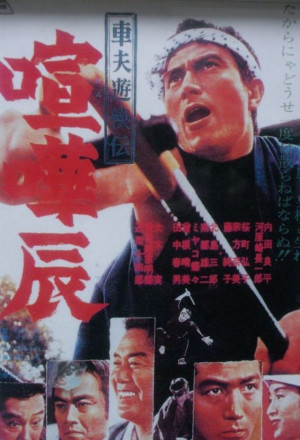 Richshaw man Tatsu has wandered to Osaka from Tokyo. He has quarrels with Kimiyakko, a geisha, and throws her into the river. But later, he falls in love with her. Yasaburo, the oyabun of the Nishikawa Gang, loves her very much too. However, as he likes Tatsu’s dynamic personality, he volunteers to become a go-between for their marriage. Yasaburo gets tipped off by Yajima who wants to take over the territory of the Nishikawa Gang, and is arrested and imprisoned. After his release, Yajima tries to kill him. Ginjiro, a lover of Tamaryu respects Kimiyakko as an older sister and a follower of Tatsu, is murdered. After the third marriage ceremony just between Tatsu and Kimiyakko, Tatsu goes off to the place of fighting.