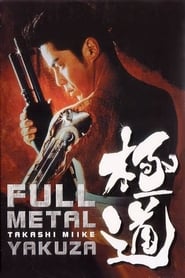 After being brutally murdered in a gangster-style execution, Kensuke Hagane (Tsuyoshi Ujiki) finds himself brought back to life by a mad scientist and rebuilt as a robot-human hybrid with a serious thirst for vengeance and the tools to carry it out. Takashi Miike directs this action-packed sci-fi thriller that takes its cues from the more mainstream Robocop but amps up the violence for maximum effect.