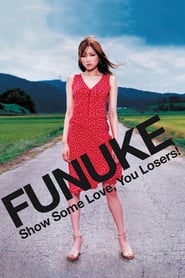 Traumatic incidents, conflicts, and bloody quarrels awaiting the Wago family members who return home to bury their parents. A one-horse town in central Japan does not look like the kind of place where passions would flare. The eccentric and selfish Sumika, who lives in Tokyo and wants to be an actress, arrives for the funeral of her parents, who have tragically died. Her younger sister Kiyomi, a talented cartoonist, is overtly afraid of her, and her stepbrother, Shinji, who has married an orphan named Machiko, is nervous and guarded around her. Each member of this dysfunctional family tries to find the meaning of life and love in their own way – but will they succeed? Shades of black humour mingle in the dialogues and actions of the individual characters; the drama of the past and conflicts of the present come to life in the comics caricatures, uncovering a bloody family strife and a collision of self-love.