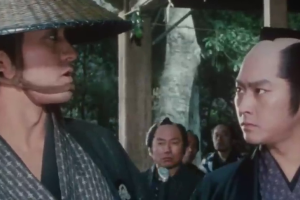 During Tenpo period, Bakuhu announced a law regulating expenditures in order to improve the financial situation. However, Doshin of a government office Itami Hanzo, called Kamisori Hanzo, challenged Bakuhu’s oppressive way. Because of this, his father Magobei was told to kill himself by the Bakuhu and Hanzo himself was demoted. Five years later, Hanzo came back to the government office and implement a law regulating expenditures. He stands up for revenge Torii Kainokami who desires power as he likes.

Ecstacy of the Black Rose

All's Quiet on the Recruit Front