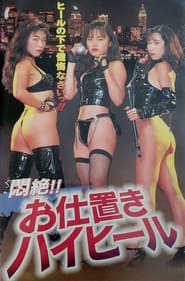 A woman is being sexually assaulted by a pair of thugs, when out of the fog appear the High Heeled Cats – a trio of avenging angels, masked and dressed in black. These beautiful vigilantes make a living running a coffee shop by day, and kicking misogynist criminals in the balls by night. Their boss is an elderly lady offering a payback service to women who have been mistreated by men. The cops can’t be seen to allow this kind of behavior, but they are increasingly frustrated with the lack of clues that might lead to the identity of the trio – despite the fact that the two detectives on the case visit the coffee shop daily, to flirt with and grope the waitresses, and drink the occasional cup of coffee. The high heeled honeys eventually bite off more than they can chew when they get on the bad side of a ruthless gangster, who sets a creepy assassin on their trail.