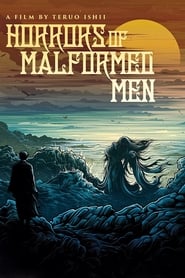 Hirosuke (Teruo Yoshida) , a medical student with almost no recollection of his past, is trapped in an asylum, despite being perfectly sane. After escaping from the loony bin, and being framed for the murder of a circus girl, he spots the photo of a recently deceased man, Genzaburo Komoda, to whom he bears an uncanny resemblance. By pretending to have been resurrected, Hirosuke assumes the dead man’s identity, fooling everyone, including Komoda’s widow and mistress. Whilst at the Komoda household, Hirosuke recalls memories that convince him to travel to a nearby island, home of Jogoro, the web-fingered father of Genzaburo. Whilst on the island, Hirosuke not only discovers Jogoro’s plans to build his ‘ideal community’ (by transforming perfectly normal humans into hideous freaks), but also the awful truth behind his own identity.