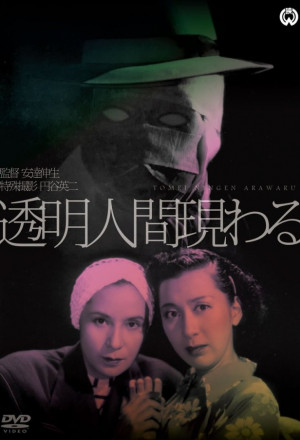 1949’s TOUMEI NINGEN ARAWARU (THE INVISIBLE MAN APPEARS/THE TRANSPARENT MAN APPEARS) 透明人間現わる was a monochrome gem with special effects supervised by Eiji Tsuburaya. Loosely based on the H.G. Wells 1897 classic novel THE INVISIBLE MAN, the Japanese take on the story, still has a scientist using a special chemical to become invisible. The story begins when jewel thieves becomes interested in an invisibility formula invented by Professor Nakazato. The thieves kidnap the professor and want to use his invention to acquire a diamond necklace called the “Tears of Amour“. There are a lot of twists and turns in this film, as to who is the Invisible Man and why. The Japanese Invisible Man looks just like Universal’s 1933 version played by Claude Rains, with bandages and an overcoat. The formula has the same adverse symptoms which effect the nervous and drive the user insane.

Kaijûtô no kessen: Gojira no musuko