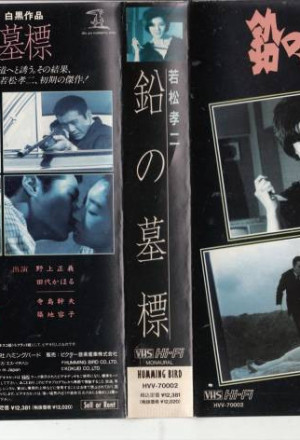 LEAD TOMBSTONE tracks the progress of a young sociopathic rake who had, immediately post-WW2, rescued his country farmer mother from rape by stabbing the offending American soldier in the back with a pitchfork. Once grown, the boy continues his violent life as a hoodlum on the run, repaying an outlaw couple who have sheltered him by raping the wife, then, at his boss’s behest, murdering the husband. He’s also not above strangling a girl in her bathtub for kicks. The one spot of normalcy in his life is his shop girl girlfriend, an innocent who, once she discovers his other life, confronts his boss… (from OUTLAW MASTERS OF JAPANESE CINEMA by Chris D)

Suit Yourself or Shoot Yourself: The Hero

Someday, Someone Will Be Killed

The Most Terrible Time in My Life