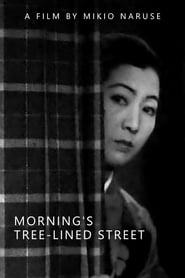 As suggested by the title, this film takes up the theme of the city, beginning with a series of traveling shots from Chiyo’s point o view on a bus leaving the countryside and entering the metropolitan cityscape. After some fruitless job hunting in downtown Tokyo, Chiyo accepts a job as a bar hostess in Shiba ward. Well away from glamorous Asakusa and Ginza, this is a neighborhood bar where the women are dirt poor, each having only one kimono to their name….