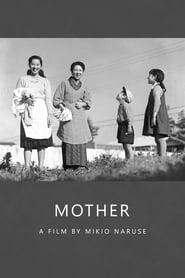 Okaasan is the story of a poor, working class mother with a sick husband who sacrifices herself to support her family in suburban Tokyo. The film defines “Shomin Geki,” a Japanese film genre that features realistic depiction of the economic underclass, told with elements of light comedy and melodrama. Okaasan is the best-known work of director Mikio Naruse, hailed by Japanese film historians as an equal of Kurosawa, Ozu and Mizoguchi, but under-appreciated in the West