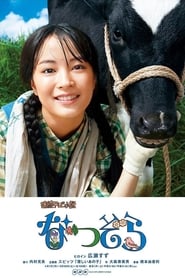 Okuhara Natsu (Hirose Suzu) was born in Tokyo in 1937. In 1945, she loses both parents to war and becomes an orphan, but her father’s comrade, Shibata Takeo (Fujiki Naohito), takes her in and moves to Tokachi in Hokkaido. In an unfamiliar land surrounded by unfamiliar people, Natsu feels lost at first, but surrounded by Tokachi’s vast nature and its strong, yet compassionate people, she grows up to be a strong girl. When Natsu enters elementary school, she meets Yamada Tenyo (Yoshizawa Ryo) who draws lovely pictures of horses. Tenyo tells her that in America, animation in which pictures move is becoming popular, Natsu’s curiosity is piqued. Year later, when Natsu is in high school, Tenyo tells her of his dream to attend art college, and influenced by Tenyo, Natsu starts wanting to work in the field of art as well. However, her foster father Takeo was planning to have her marry his son Teruo (Kiyohara Sho) and carry on the family’s dairy farming business. In the meantime, Natsu finds out that her long lost brother (Okada Masaki) is living in Tokyo. Upon graduating high school, Natsu goes to Tokyo to look up her brother, and takes a jump into the world of animation.