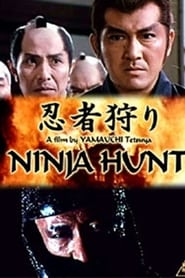 It’s a rare occasion when a noted filmmaker like Yamauchi Tetsuya gets to re-visit a previous film, and in this re-make of NINJA GARI, he not only does that, but has created an even better piece. While the original from 1964 starred the great old-time actor Konoe Jushiro, this version is perfectly cast with his son Matsukata Hiroki in the lead as Wadakuro, one of four ronin hired to fight against the Shogunate’s plot to abolish the Gamo Clan, who are struggling to reinstate their young heir Tanemaru as their Lord. Facing the threat of the Koga Ninja, Wadakuro shows his own cruelty while on a personal vendetta. This is a very brutal film, with lots of realistic ninja action, violent deaths, a dark story line and is completely without any light-hearted ‘humor’ elements that Toei used to incorperate back in the golden era. And with Matsukata Hiroki’s outstanding martial skills, the swordplay is even better in this one. This is definitely one of the best ninja movies ever made!

Hymn to a Tired Man

The Eagle and the Hawk

Affair in the Snow