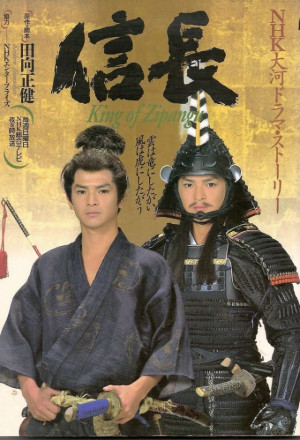 This NHK Taiga Drama spans the entire life of Japan’s first great warlord, Oda Nobunaga, who began the process of uniting Japan that was continued by Toyotomi Hideyoshi and completed by Tokugawa Ieyasu. Great history, together with tremendous battle scenes. Nobunaga, the second son of Oda Nobuhide, a minor lord whose family once served the Shiba Shugo. Nobuhide was a skilled warrior, and spent much of his time fighting the samurai of Mikawa and Mino. He also had enemies closer to home – the Oda were divided into two separate camps, with both vying for control of Owari’s eight districts. Nobuhide’s branch, of which he was one of three elders, was based at Kiyosu castle. The rival branch was to the north, in Iwakura Castle. In the third year of Eiroku, at the battle of Okehazama, Nobunaga destroyed Imagawa Yoshimoto, and his name became known throughout the realm. Within the next 10 years, he had conquered Mino province and began to aim at unifying the country. Over the next 11 years, he took in Ashikaga Yoshiaki and brought him to the capital, gaining him control of the central Kinai region. At the battle of Anegawa, Nobunaga destroyed the united armies of the Asai and Asakura, and in the 3rd year of Tensho he defeated Takeda Katsuyori at the battle of Nagashino in Mikawa Province. However, in the sixth month of the 10th year of Tensho, while Hideyoshi was on the road to the Chugoku region, Akechi Mitsuhide made a surprise attack on Nobunaga at the Honnoji temple in Kyoto.