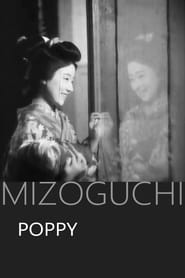 Based on Soseki Natsume’s 1908 novel of the same title, Poppy is an ornately complicated story of desire and ambition. Fujio is beautiful, talented, well-heeled, and engaged to Munechika, a rising young diplomat. She has promised him a gold watch, a family heirloom, as an emblem of their engagement. But she falls in love with Ono, a student employed to tutor her in English, who is attracted by her beauty and wealth. Ono is himself bound by an engagement to Sayoko, the daughter of his mentor, Professor Inoue. The self-centered Fujio is ready to forsake everything for Ono, but he is prevailed upon to go ahead with his marriage to Sayoko. Fujio then offers the watch to Munechika who, perceiving Fujio’s true feelings, hurls the watch into the sea.