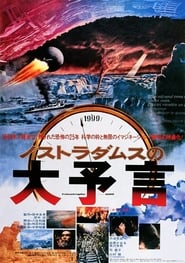 Professor Nishiyama, after studying and interpreting the prophecies of Nostradamus, realizes that the end of the world is at hand. Unfortunately, nobody listens to him until it is too late. As the effects of mankind’s tampering of the earth – radioactive smog clouds, hideously mutated animals, destruction of the ozone layer – rage out of control, the world leaders hurtle blindly toward the final confrontation. The film sparked controversy in Japan and was subsequently pulled out of circulation, with no official video release of the uncut film.