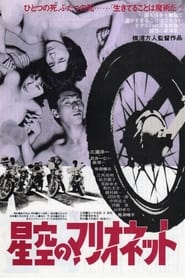 A young Japanese man finds himself in the company of a strange, effeminate gay man and a girl with a seedy sexual history and who even now is pregnant again. They share a predisposition for drug use and spend time together in an old house. He refuses the advances of the gay man, who then commits suicide. When a gang administers a beating to him, his father re-enters the scene and takes him home, along with the girl. However, the girl has decided to have her baby, and she goes to live with its father.

The Mosquito on the Tenth Floor