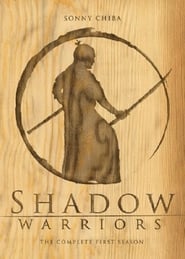 Shadow Warriors is a Japanese television jidaigeki show featuring Sonny Chiba that ran for four seasons in the early 1980s.