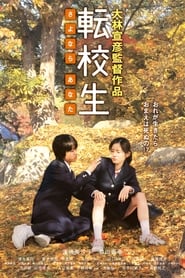 After his parent’s divorce, Kazuo Saito moves with his mother from Onomichi and must leave his girlfriend behind. At his new school, Kazuo is surprised to reunite with his childhood friend Kazumi. “Remember I kissed you, saying I’ll marry you when we’re grown ups?” He feels embarrassed around Kazumi, who talks about their early childhood stories without any reserve. Kazuo is annoyed with Hiroshi’s attitude, but with Kazumi, they naturally start to get comfortable with each other again just like old times. Kazumi’s family runs a long-standing soba noodle restaurant. One day, Kazumi invites Kazuo to her house. After talking about old times, they walk to a place from their childhood called the “Lonely Watering Place”. “Kazuo, the water here is very good. That’s why our soba noodles also taste so good.” Kazuni tries to scoop up some water with a dipper and the two accidentally fall into the water. They quickly crawl out, but suddenly realize that they have switched bodies!

Utamaro and His Five Women