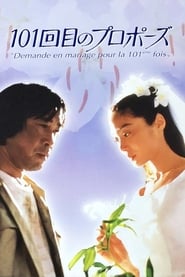 101st Marriage Proposal is a “Beauty and the Beast” story starring Takeda Tetsuya (Virgin Road, 3-nen B-gumi Kinpachi Sensei) as a down-on-his-luck man who has gone through 99 omiai (arranged dates with the intention of marriage if the date goes well). Not particularly smart, nor handsome, nor rich, he is a man who cannot lie and of course, has a heart of pure gold. On the 100th omiai, he meets Kaoru (Asano Atsuko), an extremely beautiful and talented cellist who can’t forget her dead fiancee.

Review by theTenken
One of the dramas that helped create the golden age of Japanese dramas, 101st Marriage Proposal has a great melodramatic story filled with many laughs. Takeda Tatsuya puts in another wonderful performance, this time as a very funny but unfortunate man. Asano Atsuko puts in a decent performance, but nothing particularly great or special.
Featuring a strong supporting cast with Eguchi Yosuke (Under One Roof, Tobosha, Tokyo Love Story) as Tatsuro’s otaku brother, Junpei, and Tanaka Ritsuko as Kaoru’s sister, Chie. They both lend a lot of comedic support and help propel the obligatory love triangles. This drama also features a young Ishida Yuriko as Junpei’s love interest, Ryoko. The casting is strong overall.
The script is well written, using quite a few puns and word plays, as well as creating situations where one roots for the hero to triumph over the latest obstacle in his path. Filled with some of the most memorable lines in jdrama history, this is a drama that launched the career of several of its stars, as well as the career of writer Nojima Shinji (Under One Roof, Kou Kou Kyoushi, Pride).
This drama shouldn’t be missed, as it includes lots of humor and the sappy bits, too. You can see a lot of dramas taking off of this formula, but none have quite succeeded in the same way as this one. The acting of Takeda Tetsuya differentiates it from most of the idol dramas out there.