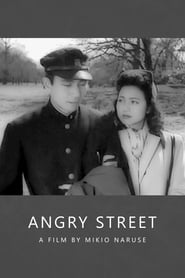 The Angry Street includes a great deal of location shooting in the rebuilt city, including downtown streets, residential neighborhoods, the campus of the University of Tokyo, and the high life of jazzy dance halls. Sudo (Hara Yasumi) and Mori (Uno Jukichi) are two university students who make money by picking up rich girls in dance clubs and conning them into giving them cash. Mori is the brains of the operation, and Sudo is the suave dancer who picks up the girls. Over the course of the film, Sudo becomes involved with three different girls and is drawn into the gangster milieu, which he seems unable to resist even though he is responsible for his mother, grandmother, and sister, Masako (Wakayama Setsuko). In this world of bad boys and girls, Masako is the pillar of strength and moral virtue who finally enables Mori to straighten out.