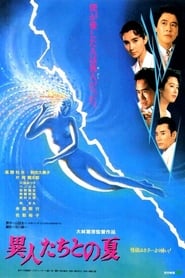 Harada is a successful scenario writer, and his best buddy has just announced an intention to propose to Harada’s ex-wife. Recovering from the shock, Harada indulges in melancholy, mainly on his failure as a husband and father, and goes to a ‘Rakugo’ (sit-down comedy) show, where a friendly man in the audience invites him home. Harada is puzzled at the strong resemblance of this man and his wife to his own parents, who were killed nearly 30 years ago when he was twelve.