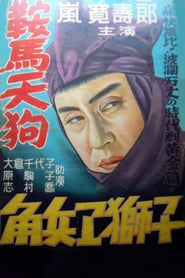 Kurata Tenzen, agent of the Royalists hides his identity, and using a disguise fights injustice during the Bakumatsu Period “the end of the Tokugawa Shogunate’s Downfall.” There was a battle to completely unify the nation under the leadership of the Emperor and to bring the power back to the Imperial Government. His battles against the Shinsengumi are what the legends are made of. If only they knew the identity of the man behind the mask!