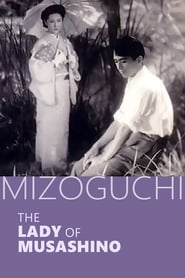 Set in post-war Japan, The Lady of Musashino tells the story of Michiko, a disillusioned young woman trapped in a loveless marriage. She confides in her younger cousin, Tsutomo, and the two become close, but decide not to consummate their affair. He instead becomes involved with the flirtatious Tomiko, who is also conducting an affair with Michiko’s husband. When Michiko finds that her husband has abandoned her, she decides to take her fate into her own hands.