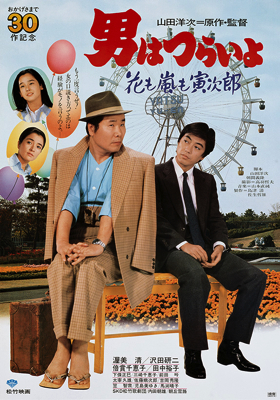 At the Yuhira Hot Springs in Oita, Tora-san helps a shy but handsome zookeeper (pop star/actor Sawada Kenji) after both fall in love with a pretty department store worker (Tanaka Yuko).

The 30th instalment in the Tora-san series. This is one of the most commercially successful films of the Tora-san series because of the two major stars involved in this production. Sawada Kenji was one of the most popular singers/actors in Japan at the time, and Tanaka Yuko will become famous through the TV series “Oshin”. In real life, Sawada and Tanaka began dating during production and eventually married in 1989. Yamada Yoji freely adapts Cyrano de Bergerac for this Tora-san movie.

Diary of a Mad Old Man