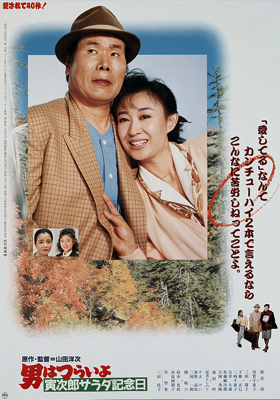 The title to this Tora-san epic is remarkably similar to that of his very first (1969) film. The ever-peripatetic one-man disaster Tora-san is in great danger of marrying and settling down in this, the 40th of many Tora-san movies. In the story, our hapless traveling salesman meets an old woman who is beset by many ailments. The old lady is being treated by an attractive woman doctor, whom Tora-san quickly falls in love with. For a while, he bedevils his family (and the doctor) by inventing illnesses which need to be checked out by the her, but finally the two of them meet on a human level and it looks as though romance, and even marriage, may be in the air. Tora-san narrowly averts the calamity of marriage by the end of the film, and takes up his sample case once again, still free to wreak his special kind of havoc on the world around him.

Suit Yourself or Shoot Yourself!! The Escape