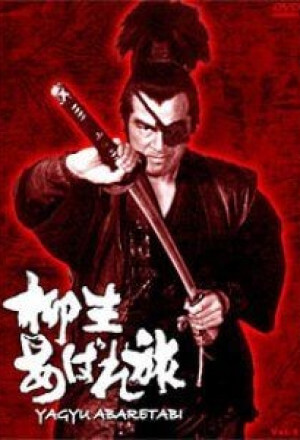 In the 15th year of the Kanei Era, a martial arts tournament is held at Edo Castle. In attendance are Shogun Iemitsu Tokugawa, his sword instructor Munenori Yagyu: Lord of Tajima, and his son Jubei Yagyu, and from Satsuma, Iehisa Shimazu. At the conclusion of the tournament, Prime Minister Shimazu’s three fighters end up victorious. After Munenori deflects a challenge to Jubei by the three men, Jubei and Iemitsu agree to put on a display of the Yagyu’s famous Shinkage-ryu style of sword fighting. During the bout, Jubei goes mad and repeatedly attacks the Shogun, his father, the Nangu brothers and the Samurai in attendance, before riding off on horseback. With his son Jubei now a wanted criminal and his son Matajiro confined to the Yagyu village, Munenori must make a difficult decision: who will take over for Jubei and inspect the Nakasen route between Edo and Kyoto. He decides his daughter Akane will disguise herself as a man and call herself Nuinosuke Yagyu. Joining Akane will be longtime Yagyu family friend Tarobei Kaburagi and Secret Yagyu Arisuke Aand Akemi risawa. Also helping Akane on her journey is Jubei. Working from the shadows, Jubei disguises himself both as Maboroshi Tengu, a Phantom Goblin who and as an old man named Gonbei who befriends Okoma and her Yume-no-ya troupe, a group of travelling stage performers. Working with Jubei are the other members of the Secret Yagyu, who disguise themselves as acrobats and join the Yume-no-ya troupe. From time to time, wandering half-brother Matahei also assists Akane and Jubei on their mission. As the journey progresses, Akane and her group encounter all sorts of corruption by local town officials and a conspiracy against the Shogunate by the Satsuma clan led by Iehisa Shimazu. Akane also discovers the truth about her past and is reunited with a long lost relative before finally putting an end to the plot against the Shogun.