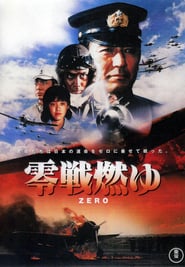 Two young men are recruited into the Japanese air force just before outbreak of WW2 by the test pilot of Japans new super fighter – the Zero. The movie is told in reverse from the point of one of the young men who don’t qualify for the pilot training and instead joins the ground crew. It chronicles the entire history of the famous fighter from the first prototype test flights all through the war.

Under the Flag of the Rising Sun