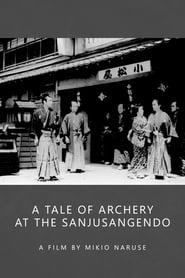 A Tale of Archery at the Sanjusangendo (1945)

In A Tale of Archery, young, timid bowmaster Kazuma (Akitake Kôno) seeks to beat the archery record set by Hoshino Kanzaemon, a mysterious figure who, it is rumored, drove the previous champion (Kazuma’s father) to suicide. Possessed of much raw talent, Kazuma is also very much a coward, holing himself up in an inn run by the kindly Okinu (Kinuyo Tanaka) and generally avoiding confrontation of any sort. Despite his clandestine manner, enough of the locals know of Kazuma’s purpose and an attempt is made on his life. He is saved by Karatsu Kanbei (Kazuo Hasegawa), a samurai who offers to help Kazuma hone his archery skills, though it soon becomes clear that this apparently selfless stranger has several potentially shady ulterior motives.

The Retreat from Kiska