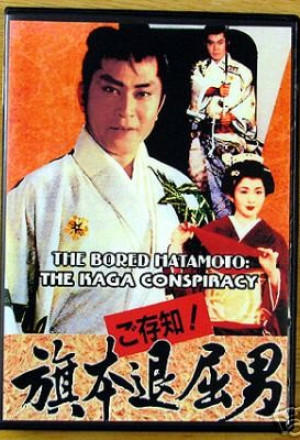 When Saotome Mondonosuke, master swordsman and ?Hatamoto’ (direct retainer of the Shogun), hears rumors of a Daimyo?s plot to overthrow the Tokugawa Shogunate, he launches a private investigation. With the help of his sister Kikuji, his faithful steward, Kinai, the Kaga Clan?s former fencing instructor and a mysterious woman named Kocho, they begin to unravel the twisted web of deceit, treachery and secrets within the Kaga Clan!

One of the most popular motion pictures of all time, ‘The Bored Samurai’ has been revived by talented young actor Kitaoji Kinya, the son of Ichikawa Utaemon, who made the role famous in more than 25 films. Saotome Mondonosuke is a ‘Hatamoto’ or direct retainer of the Shogun. The crescent shaped scar on his forehead is a license given him by the Shogun to kill anyone he deems to be a villain.

When Ichikawa passed away, it was thought that the character had died with him. But like Mondonosuke, who needs constant action to fight boredom, his greatest enemy, Kinya had to revive the role to honor his late father and carry on the tradition. A rousing success was recorded in these made for television movies, and this entry (the seventh) is no exception.

A strong performance that reflects well upon his father and an interesting story make this film required viewing.

Living For the Sword