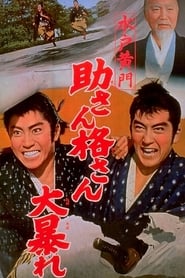 The story of two young men whose ambition is to become the personal bodyguards to the Shogun's uncle, Lord Mito Komon. Portrayed by a pair of up and coming stars, Sasaki Sukesaburo (Matsukata), the son of a widower and Atsumi Kakunoshin (Kitaoji), whose mother is a widow find themselves constantly in trouble and are forced to become two of the most powerful fighters in all Japan. The stories about Mito Komon and his travels througout Japan are many, but this is one that had yet to be told. The struggles of Suke-san and Kaku-san faced in order to join the Elder in his quest to fight against injustice and corruption during the samurai era.

The Lord Takes a Bride