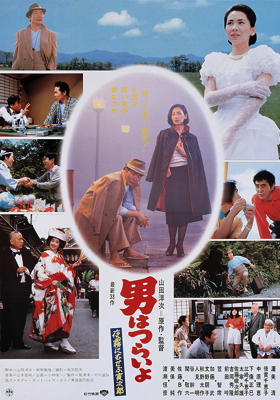 Tora-san meets an old friend whom he hasn’t seen for a number of years. His friend is now a married man. He has abandoned his wandering life and settled down. This makes Tora-san feels sorry for himself. So, when he meets a pretty but troubled barber (Rie Nakahara), who was unable to hold down a steady job and wants to become a wanderer, Tora-san urges her marry someone reliable and stop being unrealistic. He accompanies her to Nemuro where she falls for a motorcycle rider at a circus. Later, when Tora-san is attending the wedding of neighbor Akemi (Jun Miho, who debuts here in the series and will appear in some other episodes), he and the barber are reunited again.

Youth of the Son