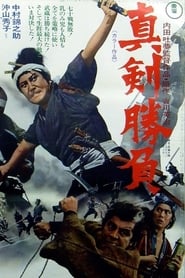 In the sixth and final episode Rentaro Mikuni steals the show as Baiken Shishido, Musashi’s nemesis. Mikuni is the nominal villain of the film, but he is a devoted husband and father as well. He tries to kill Musashi only to avenge the death of his brother-in-law. While Baiken (who wields a chain and sickle against Musashi’s sword) is a very human character and the emotions that Mikuni displays in his performance are quite believable and engaging

Brothers and Sisters of the Toda Family