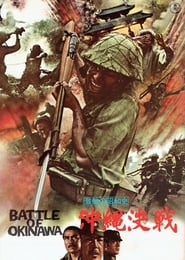 The Americans are swiftly closing on Okinawa, an island just south of the Japanese mainland. The Imperial command sends top generals and several army divisions to defend it at all costs. The mission quickly degenerates as vital resources and troops are diverted to other islands. After a civilian evacuation ends in tragedy most of non-combatants are forced to remain on the island. Many convert to soldier status. Tokyo sends mixed messages that squander time and resources, as when they order the defenders to build an airstrip for aircraft that never come. The truth soon becomes obvious: the high command decides that the island cannot be held and effectively abandons the Okinawan defenders. When the Americans land many troops are deployed in the wrong places. As the slaughter mounts, a suicidal attitude takes hold. Okinawa becomes a death trap, for civilian volunteers and non-combatants as well.