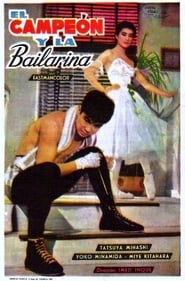 Eikichi Yamashiro, who is a former contender for the boxing title, works as a manager at a Club Champion owned by his fiancé Natsuko’s father. He lost a title match five years ago as he was besotted by Natsuko, but Eikichi actually cannot give up the dream of the championship. One day, he meets Shuntaro Fuma, who is a punk kid but a promising boxer, and realizes the dream that he himself could never fulfill. Then, they together start to train with the aim of the title. Mari Shiraki is an up-and-coming ballerina under the patronage of Eikichi as well. Eikichi forbids Shuntaro and Mari to be romantically involved with someone during their training, however, they start to go on a date. (source: Nikkatsu International)