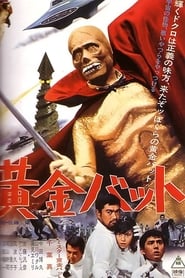 A teenage boy discovers that the planet Icarus is on a collision course with Earth by gazing through his telescope. Scoffed at by the scientific establishment, the boy is kidnapped and brought to a secret UN base in the Japan alps. He is immediately inducted into the secret program whose mission is to finish the Super-Destruction Beam cannon and destroy Icarus. The cannon is missing a special mineral for the lens. The team heads for a mysterious island in the middle of the Pacific. There they find ancient ruins of Atlantis but they are suddenly attacked by a strange drill shaped metal squid spaceship. It’s commanded by the evil being Nazu who has engineered the collision with Icarus! He doesn’t want to share the universe with humans and he really doesn’t want the cannon finished. The action is on and the team discovers the Golden Bat who has been asleep for over 10,000 years awaiting this very moment to save the earth!