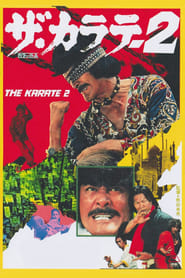 This is the second film of the ZA KARATE trilogy (AKA BRONSON LEE CHAMPION). Tadashi Yamashita reprises his role as the Karate World Champion and must faces dozens of worldwide pretenders, such as the Guillotine Brothers of New Guinea, Killer Samson, Dracula Jack (Bolo) who all want a shot at him at all cost and also to steal the famous Orikirimaru Sword.

The Dragon of Macao