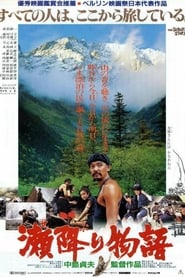 The culturally isolated, nomadic Seburi people of western Japan are the subject of this tragedy about a few of the community’s members who especially experience difficulties as modern Japan encroaches on their world. The setting is World War II, and conflicts have already arisen when the military police come to take Seburi men away into the army. Still following their own customs that can be harsh at times, and are particularly cruel to women (women must give birth alone and unaided, a woman’s adultery is punished by burying her up to her neck in the earth and then leaving her for days), the Seburi are mainly treated with fear and animosity by the non-Seburi townspeople of the region. Along with the hardships arising from cultural clashes, nature’s own vagaries present other challenges to the Seburi — who still lived in tents until the 1950s. Winter avalanches and snowstorms cause as much havoc as the tensions engendered by the slow encroachment of the modern world.