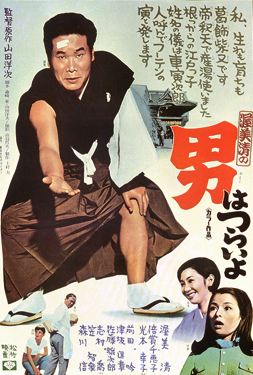 Tora-san, an itinerant peddler, returns home after twenty years to find his parents passed away and his only sister, Sakura, running a local sweet shop and living with their aunt and uncle. Tora begrudgingly agrees to Sakura’s planned marriage to a painter, but only succeeds in ruining the marriage when he behaves outrageously at the pre-wedding party. He unwittingly falls in love with the daughter of a Buddhist priest. Upon learning that she is already preparing for her own marriage, he decides to leave home again to hide his chagrin.

Otoko wa tsurai yo “It’s tough being a man” is a Japanese film series starring Kiyoshi Atsumi as “Tora-san”, a kind-hearted vagabond who is always unlucky in love. Spanning 48 installments (1969-95), it was considered by the Guinness Book of World Records to be the longest movie series in the world, although it was recently replaced by the Huang Fei-Hong series. All of the films (except episodes 3 and 4) were directed by Yoji Yamada, who also wrote all the screenplays.

All of the Tora-san movies had the same basic plot. Tora-san, a traveling salesman, arrives in some remote town planning to peddle his wares to the locals. He meets a local woman, usually a damsel in distress, and tells her that if she is ever in Tokyo to look him up. He then heads back home to Shibamata, Katsushika Ward, Tokyo and drops in unexpectedly on his family. Sure enough, the damsel in distress ends up visiting Tora-san in Tokyo, and he falls madly in love with her. However, in his efforts to win her heart, he usually ends up inadvertently helping bring her together with an old boyfriend or another man; Tora-san invariably ends up heartbroken at the end of the movie. Each film featured a different leading lady, called a Madonna, and a different region of Japan.

Bound for the Fields, the Mountains, and the Seacoast

Two in the Shadow