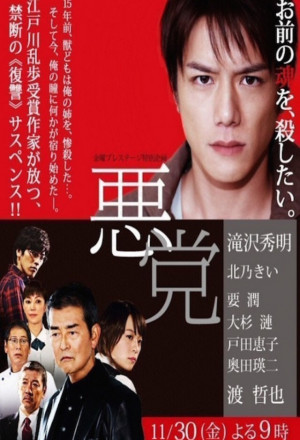 Former police officer Saeki Shuichi (Takizawa Hideaki) is now a private investigator at Hope Detective Agency. He is asked to trace Sakagami Yoichi (Kaname Jun), who was released from a juvenile corrective institution, by a couple whose son was killed by this man 11 years earlier. They want to know how he has been living and if they should forgive him. Saeki is ordered to take on the case because of the agency’s financial difficulties, but he understands the extent of the couple’s pain. 15 years ago, his beloved older sister was assaulted and killed as she was returning home with a cake on his birthday. The intense hatred he feels for the criminals have not faded even with time. It was the same for his father, Junichiro (Osugi Ren). Saeki tells the couple that if it were him, he would not forgive Sakagami. Meanwhile, Saeki finds a man that he has been pursuing. It is Tadokoro Kenji, a ramen shop owner, and one of his sister’s killers. Saeki meets the bartender Haruka (Kitano Kii) when he goes to a club belonging to Tadokoro’s childhood friend to check him out. One day, Haruka prepares a cake and present for Saeki as a surprise. He had forgotten about his birthday ever since his sister’s death. After all, it is the day of her death anniversary. However, he learns about Haruka’s love for him and mumbles ‘Thank You.” The next day, the body of Terada is found stabbed to death by a riverbank. Terada is also one of the three who assaulted Saeki’s sister. Terada appears to have been blackmailing Tadokoro about the incident 16 years ago. Tadokoro is soon arrested. Two of his sister’s killers have already fallen into the pits of hell. On the day that Saeki is lost in a daze, Haruka leaves the apartment and disappears. Saeki decides to resign from the agency, but is ordered to do one last investigation. This time, the target of the investigation is Enoki Kazuya, the main culprit in his sister’s death. “I want to kill this fellow’s soul … … I’ll become a villian,” Saeki tells himself and starts to take action.

Battles Without Honor and Humanity: The Complete Saga