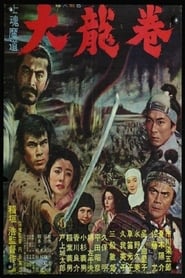 Set at the end of the Siege of Osaka this film follows the exploits of several members of the defeated Toyotomi clan as they cope with the post battle chaos and the persecution of the Shogun’s army. Five samurai decide on different fates when it becomes clear that their side is being destroyed. One wants to attack the enemy head on in a final honorable death. Another decides to commit hari-kiri but wants to find a glorious view to do it. His close friend, the “coward”, just wants to run and give up the life of a samurai. The final two set their own castle on fire to garner favors from the enemy and therefore avert their own death during the massacre of all defeated soldiers as

Tenka no igagoe: akatsuki no kessen