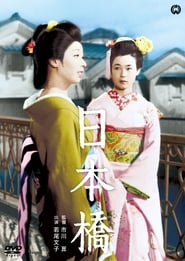 Ichikawa’s 1956 adaptation of Nihonbashi was the first to take the work of Kyoka Izumi— until then regarded as a writer of common tragic melodramas—and re-evaluate it as a tanbi-ha work of decadence, aestheticism, and intrigue. Ichikawa’s film presents the tragic plot of the young geisha who is unable to enact her love for a man publicly in any way other than a histrionic story of torment, a heart-rending tale of lovers being crushed by fate. Instead, Ichikawa shows the contest of wills that transpires as two geisha, Oko and Kiyoha fight for the top spot in Nihonbashi, the pinnacle of the Tokyo geisha world. Nihonbashi is an elegant, if steely, exposition of manners. The young doctor, Shinzo Katsuragi, is the object of affection for both women, but appears to be more the choice reward for the plotting and thieving of these two early modern superwomen, than a lover they swoon over.