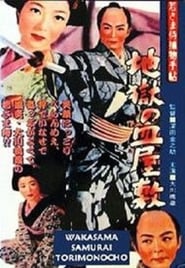 As a result of illness and unemployment, Yamaoka Tatewaki, a “Hatamoto” (or direct vassal of the Shogun), pawned his family heirloom, a valuable Gosu plate for 100 ryo. When, of all occasions, Yokogawa Dewa came to visit and asked to see the Gosu plate on May 5th, Boy’s Festival. Yamaoka then sent his steward to borrow the plate back, but the pawnbroker coldheartedly refused. He died soon thereafter of an unknown cause. Soon after that, two warehouses were broken into, but nothing was taken. When Detective Shokichi seeks the help of Young lord samurai, in solving these mysterious crimes that plague the town he takes the case and immediately surmises that the thief was looking for something special. Could the answer be hidden in the coffin of a deceased merchant who had his most valuable things buried with him. The tension mounts and the mystery deepens. Can Young lord solve the case?