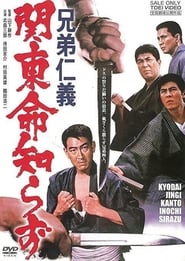 Saburo Kitajima, one of Japan’s most famous Enka singers, returns in the fifth of the Kyodai Jingi series. During the early 20th century, Ryuji from Asakusa, a wandering yakuza, joins the Narumi Family in Yokohama. However, when he confronts Shiotaro, the head of the rival family, Ryuji takes a liking to him. He ends up leaving his current family, and becomes close to Shiotaro like brothers swearing to become a full-fledged yakuza.