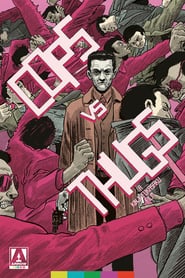 In at least 6 movies by director Kinji Fukasaku, Bunta Sugawara played a yakuza thug. This time, he carries a badge but his character hasn’t lost his distaste for double-dealing bosses and authority figures who are out to cover their own butts. Detective Kuno is balanced between the law and pragmatism. Cops didn’t enforce the law to the point of pushing gangsters over the edge. In return, the gangsters mostly stayed out of the public eye. Some of them even became friends with cops, sharing a mutual desire to keep-down trade unions and leftists. When that balance is upset, Kuno has to decide where his loyalties lie. In this gray world, cops aren’t always good and gangsters are thoroughly bad.. although there’s no reward for good men who drink from the cup of corruption. “Cops Versus Thugs” has that trademark Fukasaku camera-work.. constantly moving, zooming, and putting you right in the middle of the action, changing loyalties and political maneuvering between cops and criminals.

Case of a Young Lord 4: Bridal Robe in Blood