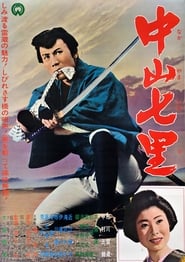 When a corrupt magistrate rapes Oshima, Masa (Raizō Ichikawa) avenges her by killing the officer, becoming thereby a fugitive, haunted and grief-stricken by the fact that Oshima committed suicide. Going underground in the gambling world, perpetually hiding from the law, Masa eventually meets a young woman named Onaka, who looks exactly like Oshima. Tales having two look-alike heroines are a commonplace in Japanese period films, a plot affectation inherited from the kabuki theater. Based on a novel by Shin Hasegawa, Nakayama shichiri was already twice filmed in 1930, one version directed by Namio Ochiai, and from which less than 40 minutes survive, the other directed by Kyotaro Namiki. Both are silent films, preserved by the Makino film institute.