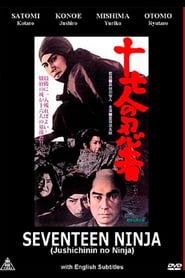 As the Shogun lays dying, seventeen Iga clan ninja are sent to infiltrate the impenetrable fortress where his youngest son is preparing to storm Edo Castle and name himself Shogun by force of arms. They are to either steal the documents that will eventually give him lawful claim to rulership, or they are to assassinate him. But even before they reach the castle walls, they find their every move countered by a ruthless ninja hunter in the employ of the would-be usurper (Konoe), who not only knows their every tactic but knows the exact make-up of their team thanks to his own spies within Edo Castle. As the Iga Ninja fall one by one, the mission’s success or complete failure–where failure will result in a bloody war of succession–comes to hinge on a single young and inexperienced ninja (Kotaro).